Today’s Tuesday Shoesday has a little story behind it (really what doesn’t with me?). Mr. C and I went to the movies over the weekend. Two things about this – 1. We never ever go to the movies 2. We went to see Water for Elephants. I still can’t believe Mr. C was game for this. Anywho…although I love love love Reese, I was a bit sceptical going in about the whole R Patz thing (that’s what the kids call him apparently). Well, wouldn’t you know, by the end of the movie I was in a full Twilight trance (this is something I probably shouldn’t admit). I would like to blame said trance on Reese’s amazing apparel throughout the movie. I mean, seriously – minus the whole depression and prohibition thing, I think I would have really enjoyed myself style wise in that era. She also rocked bangles the entire movie – from casual to formal – from riding horses to elephants, the bangles were there. So when I saw these shoes, I couldn’t help but think how perfect they would be for her character. 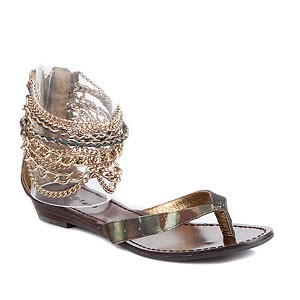 What do you think? Would you wear these? I personally think if you happen to be honeymooning in Greece in the near future they are a must have. Best part? They are $39.99. True story.